The Hammerglass screens withstand both chemicals and windscreen wipers. In highly exposed environments, where normal screens are subject to chippingdamage or abrasion by sand, grit and gravel, the Hammerglass-screen can be provided with a self-adhesive sacrificial film, which the driver can replace as and when required. A sacrificial screen rotects the thicker Hammerglass-screen in the RABS-frame during hammering.

The Hammerglass screens are coated with a thin layer of silicon oxide (this can be most closely likened to a thin glass membrane), which protects the screens against scratches and wear and tear. The windscreen wiper does not normally cause screen wear. In sand-filled environments, however, and when the screen is exposed to gravel and grit, we recommend that a scratch-resistant sacrificial film is applied to the Hammerglass screen. The sacrificial film  is an additional protection that extends the life of the Hammerglass pane. The film consists of two layers of protective plastic foil, with a surface that can withstand some pretty rough use. However, it should not be confused with the protective coating of the Hammerglass pane. The sacrificial film is a consumable item. When the film has become sufficiently worn, it is replaced with a new one. Depending on the degree of wear, the sacrificial film will need to be replaced at various intervals. It could be once a week, once a month and so on. 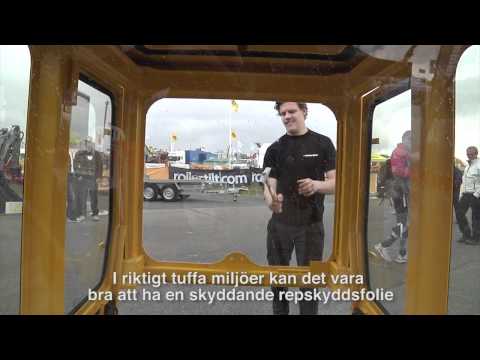