Undetonated explosives (duds), large rocks and boulders may pose a direct threat to the life of the machine driver. For this reason tightened regulations relating to mining and quarrying should be considered: Where there is a risk of undetonated explosives being encountered, or where quarrying is in progress, special glass should be used in the machine cab. If a charge is detonated, it is not sufficient to have protection in the windscreen alone. In a powerful explosion the side screens are also forced into the cab, regardless of whether they are made of toughened glass or laminated glass. Hammerglass solutions are also available for side screens and rear screens.

REPLACE THE SCREEN. NOT THE DRIVER.

ROCK ON. ROCK OFF.

Hammerglass in comparison with a competing laminated glass in a FOPS test in the autumn of 2020.

This is how it went, and the question is...

GLASS or HAMMERGLASS.
WHAT WOULD YOU CHOOSE?

A series of tests in accordance with EN 13124-2 has been conducted on Hammerglass vehicle screens. Screens in a number of designs were mounted in various types of steel frames. Seven explosions were carried out, at a distance of 3 metres and 5 metres respectively. As a result it was demonstrated that 12 mm Hammerglass screens withstand the pressure wave generated by 3 kg TNT being exploded at a distance of 3 metres.

As an added bonus, at the end of the test, several kilograms of excavated rock were arranged in front of the explosive charge. The rocks made deep notches in the screens, but nothing more. On the other hand, the rocks went straight through the steel plate in the container – 3 mm Corten steel – and the container was physically moved by the explosions, despite being filled with 20 tons of concrete pigs in order to stabilise it.

A vehicle window used in really tough work environments must meet certain requirements, both in terms of performance and safety. RABS is the designation for vehicle screens which indicates that the screens satisfy a combination of international safety standards.

In order to be marked "RABS Approved", the screens must pass all of the following four tests. Using a RABS-classified solution satisfies personal protection requirements for work involving the risk of undetonated explosives, falling rocks and while quarrying. Hammerglass in a steel frame satisfies the RABS requirements.

The machinery operator should feel safe even if incidents should happen. The patented Hammerglass RABS-frame has been developed with a focus on maximising personal safety in tough environments.

Our specially developed system comprising a 12 mm Hammerglass screen bolted to a sturdy steel frame has undergone rigorous testing at SP (Technical Research Institute of Sweden) and SMP (Swedish Machinery Testing Institute), and meets the requirements laid down in the RABS-classification. 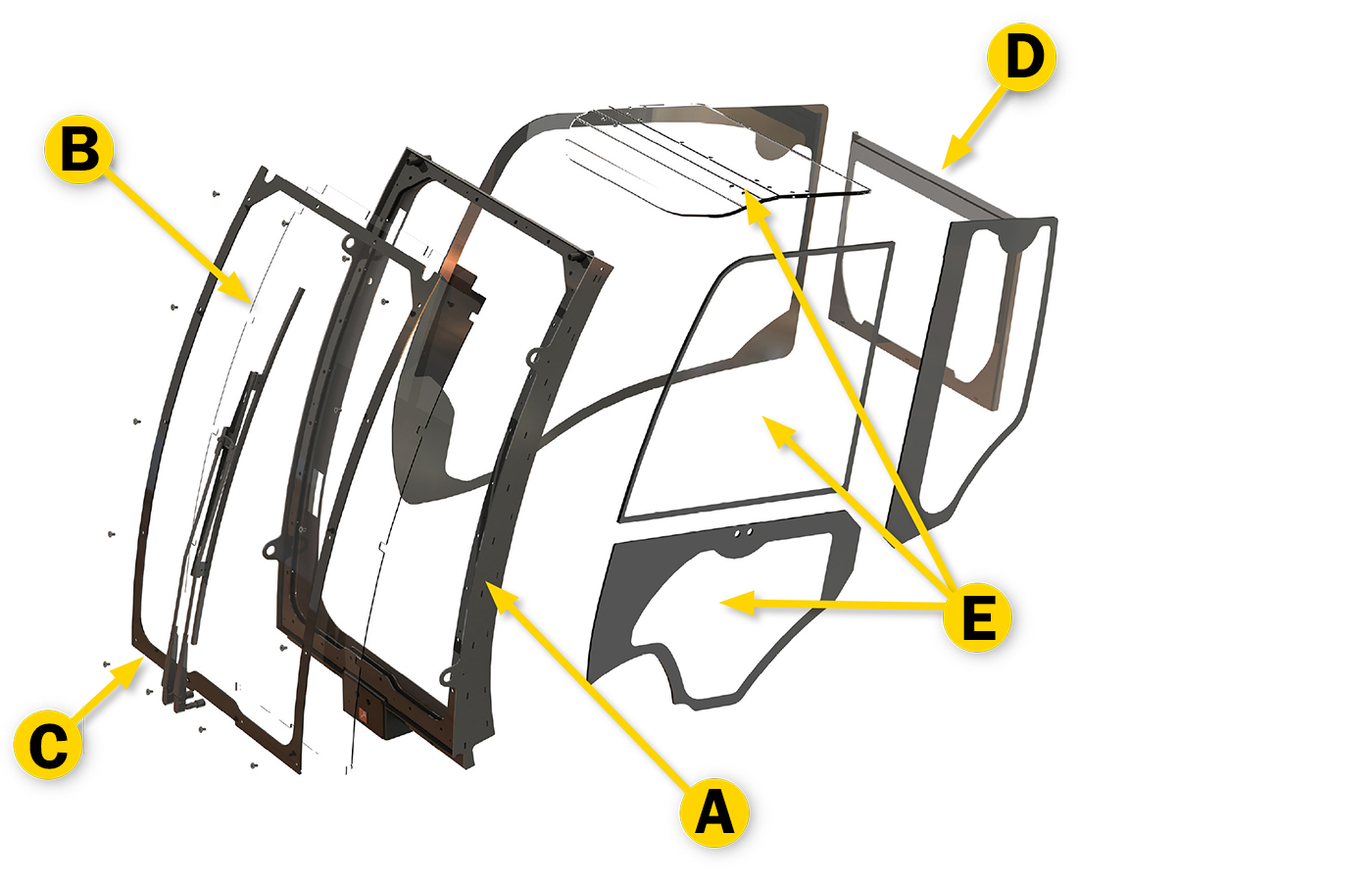 With every Hammerglass screen and RABS-frame a detailed and specific installation instruction is provided. Read this before the assembly begins!

Hammerglass AB is certified in accordance with ISO 9001:2015, ISO 14001:2015, ISO 45001:2018 and applies PPAP in all processes. Our structural engineering department will be at OEM’s disposal providing its expertise.